The film tells the story of one of history’s smallest but bravest ships – ‘The Duyfken’ (or Little Dove) It pioneered Spice Island trade routes, fought battles with ships three times her size and, sailing to the edge of the known world, discovered the last habitable continent, Australia. 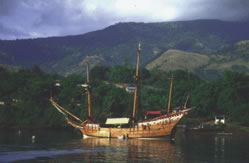